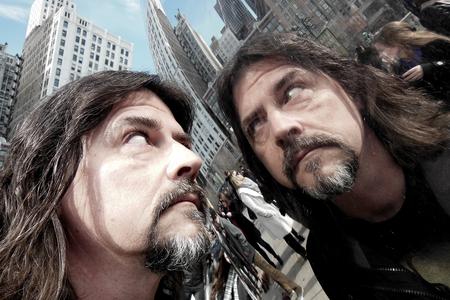 Billy McGuffey was born in the deep South during the 1960’s and moved at three years old with his family to the suburbs of Chicago Illinois. Somewhere around this young age where most children learn to walk, he began learning to draw. He is a graduate of College Of DuPage in Glen Ellyn IL. where he received two degrees in commercial art and design as well as portrait rendering. He has been working as a free-lance artist since 1982, doing both commercial and fine art. He painted his first mural in 1971 on the walls of the house he was living in, to the raised eyebrows of his parents. During the 1980’s He began working with several clothing stores in the Midwest area, airbrushing designs on t-shirts. This lead into working with many local music bands designing logos, banners, musical instrument painting as well as album covers. He gave up his retail commercial art business in 1992 to concentrate on extremely detailed murals, paintings and drawings. Thus, “Extreme Creationz” was born.

Since his career began, he has painted thousands of works of art, including public and private murals in and around the Chicago area. Many students with the desire to learn airbrushing have attended his classes and seminars in a variety of schools, colleges and art stores. Several times he has represented the Badger Airbrush Company at outings and conventions, showing all that can be done with their products. For his work in design and advertising, he was honored with a bronze medal in 1981 by the state of Illinois.

Considered one of the leaders of the airbrush movement in the Chicago area, his work has been featured in numerous exhibitions and photographic collections, as well as in newspapers, magazines, and television all across the United States. His work can be seen in many styles and on many medias as well, from one side of the spectrum all the way to the other. From beautiful family portraits adorning living room walls to nightmarish images displayed on your motorcycle tanks.

For over thirty five years, Billy McGuffey’s business, “Extreme Creationz”, has been creating customized designs for businesses and personal clients across the country. Billy is a true artist that brings every creation to life through his unique abilities and styles. “I am passionate about my art and capturing my client’s ideas, requests and personalities. I've often been told that I have the ability to bring to life a thought and it is my ultimate goal to be unique and to make you unique.”

He is currently pursuing his career as professional airbrush artist as well as a detailed pencil artist. Creating amazing renditions of famous faces, custom portraits of your loved ones, endearing paintings of your pets as well as original ideas in your head that you’d like to see come to life, Billy McGuffey and Extreme Creationz guarantee your satisfaction for years to come!

EXTREME CREATIONZ
The Art Of Billy McGuffey
View on Mobile